Strong King tides are coming to a coast near you! King tides are stronger than normal tides at the full and new moon phases and occur during specific times of the year for different locations on Earth. In California, we experience King tides during the winter.

King tides are larger than normal tides for both low and high points, meaning areas  near the coast are more susceptible to flooding during high tide, and places with tide pools will have more accessible areas during low tide. The next King tides will be December 4th and 5th, with more coming on January 2nd and 3rd, 2022. In areas North of Ventura County, the tides will occur on an additional day– January 1st. Click here to learn more about King tide observation and community events happening near you. 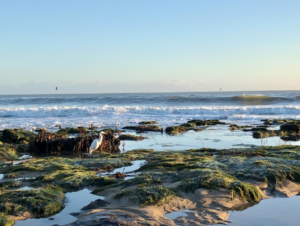 The high King tides can cause flooding and damage to coastal areas. The California Coastal Commission is an agency  working on gathering information about King tides through community science. This data is useful to see what coastal areas may look like after sea level rise due to climate change. Coastal organizations and agencies are asking for help from community members to contribute to the research by uploading photos to the Coastal Commission’s website or using the Survey123 mobile application. Instructions on how to use both platforms can be found here. 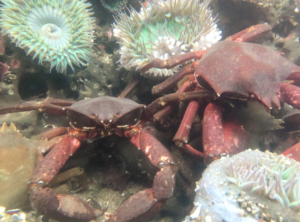 Northern Kelp Crabs and Green Sunburst Anemone in a tide pool that cannot be observed during average low tide but are visible during low King tides. Photo taken by Laurel Wee near Natural Bridges State Beach.

Caution should be taken during observations of high and low King tides. When visiting tidepools during low King tides, keep in mind these pools are small habitats-  homes to many different marine plants and animals. Organisms that need more consistency in water level are found in the pools that are only present during lower tides.

In January of 2019, I went tide pooling at Natural Bridges State Beach where I saw fish, crabs, and anemone that I had never seen before due to the lower than average negative 1.5-foot-low tide. I was able to use iNaturalist (see this blog to remember how to make a post) to get identifications on what I saw. I  was able to collect some big pieces of trash that had washed up during the 6.5-foot-high tide earlier that morning. Although I did not know about the Ocean Conservancy’s trash tracking app yet, it felt good to make a difference by putting the pieces of metal and fishing line into the garbage can (remember Coastal Clean Up Day Can Be Every Day).