Women’s History Month invites us to honor women who have blazed new trails of exploration and conservation to protect and preserve the places we love. (Let’s be honest – we do this every month. ❤️)

From Junko Tabei – Japanese mountaineer and first woman to reach the top of Mount Everest and achieve the Seven Summits, to Secretary Deb Haaland – the first Native American person to serve in the United States Cabinet, women have climbed to great heights (literally!) to discover and care for some of the most beautiful places on Earth. 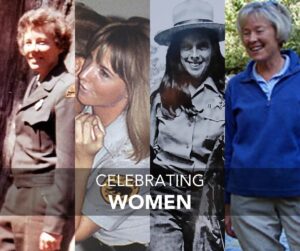 Additionally, women across the state manage programs and projects to preserve California’s unique biodiversity, and California State Parks has a rich history of women pioneers who have shaped the parks we love and enjoy today, such as:

Whether it’s at the White House or at your local state park, the work to make our state parks and public lands welcoming, inclusive and climate-resilient spaces would not be the same without women’s presence and contribution.

Want to learn more about the women of Parks California? Click here.